Happy Month of our Independence! My recent travels have left me inspired. Last week, I was part of the support team for my two sons who were Ironman competitors in Coeur D Alene, Idaho. When the starting cannon sounded, my eyes filled with tears, as over 2000 very fit men and women dived into the lake to begin one of the most grueling physical contests in the 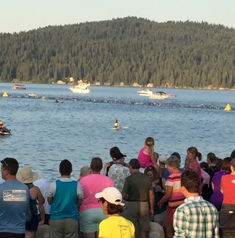 world. The 2.5 mile swim began at 5:30 in the morning, with the 112 mile bike ride up next, and finished up with a 26.4 mile marathon, closing 17.5 hours later. The racers knew they faced 108 degree record breaking temperatures and yet they were digging down deep into who they were, racing undaunted.

As I cheered on my sons, a blind veteran leashed to his trainer ran by me. I was seized by emotion imagining what the event would be for one who could not see. I wondered where do we get such people; fearless humans putting themselves on the line? We have a country full of them. I thought of our mighty volunteer military as my mind scanned to World War II and the effect of those deadly bombs dropped on Pearl Harbor in 1941; their impact on our American psyche. They awoke our “sleeping giant.” As America’s arsenal for democracy became activated, our factories poured

out an unequaled volume of planes, Jeeps, mortar and artillery. With our able bodied men at war, our women stepped up; hundreds of thousands, taking over in the factories, keeping the war machine going. I thought, this is what Americans do.


With that in my head, I was particularly interested in the 4th of July piece by my friends, doctors Pedro and Priscilla Partridge de Garcia, who documented just what the signers of the Declaration of Independence endured to ensure our freedom. They wrote that of the 56 signers: “five were captured by the British as traitors and tortured before they died. Twelve had their homes ransacked and burned. Two lost their sons serving in the Revolutionary Army; another had two sons captured. Nine of the 56 fought and died from wounds or hardships of the Revolutionary War. They signed and they pledged their lives, their fortunes and their sacred honor.” The article went on to explain that they were gentlemen; lawyers, merchants, farmers and plantation 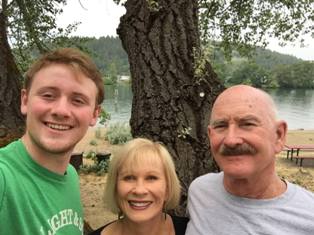 owners. They were educated men knowing that the penalty for their acts, if captured, was death. This proved to be true, yet they signed.

This is our heritage, a story of bravery and commitment. During my 45 years in the college classroom I was continually reminded of our American story as the Viet Nam vets rolled into my classroom on gurneys and wheelchairs, eager to finish their educations so they could support their families. Then later the Desert Storm vets, men and women warriors who taught us about sacrifice and desert warfare, and then the Iraq War vets who shared about IED’s and canvas doors on their Humvees. They all demonstrated a bravery and a commitment to our freedom that I will never forget. As many of you know I have traveled the corners of our globe, and almost everywhere I visit, I learn the people of others places can only dream of the freedoms we enjoy everyday. How blessed we are to live in the “home of the brave.”
tagPlaceholderTags: Inpirational, Travel