Hi there! I hope this note finds you well. Back in April, when we learned that our Covid-19 isolation orders would continue for some time, I woke up one morning with a new idea. We had been tackling the attic,
and I'd been going through old photos and papers belonging to my great grandparents and grandparents. They were intriguing, depicting rare views of old Venice Beach, California, when it was known as Venice-of-America. How sweet it was to see my great grandparents smiling out from their perch on the sand at the end of Venice Boulevard in 1900! My family arrived in Los Angeles around 1887 when the train came through from the Mid-West and spent a great deal of their time in the coastal area of Los Angeles.
It got me thinking. I, too, had lived some remarkable aspects of lost Los Angeles history. The look backward inspired me to write the story of
my growing up years in Venice, California during a period when it was an industrial zone, the fourth most productive oil field in the state. I know it sounds crazy to tell you that my next door neighbor was a gigantic oil-well derrick attached to a working pump house, whooshing up and down during all the days and nights of my growing years. We lived in a 400 square foot bungalow built out of war surplus materials. It was located right on the beach, but surrounded by these steel monoliths.
Energized, I began writing, while Ken kept offering to drive me on research field trips up to Venice. The trips were fun and easy because the traffic during lockdown was non-existent. The book Growing Up Venice: Parallel Universes will be available soon. For now I want to share a particularly charming result I encountered.
About a week ago, Ken and I drove up to the old Helms Bakery Building on Venice Boulevard in Culver City. The trip was prompted by a picture of a Helms truck and childhood memories we both have of its visits to our neighborhoods. It is a design center now, boasting a pedestrian walk with restaurants and places to meet up. We took photos, bought chocolate éclairs, and took an outdoor seat looking across the street toward Paramount Studios. Of course, it was something of a walk down Memory Lane for me. My third grade field trip had been to this famous bakery. I could almost see the huge metal machines mixing thick dough, and could smell the sweet aroma of baking cookies. The friendly "toot toot" of the Helms Man's yellow and blue truck was clear in my memory.
My most beloved remembrance is during visits to our grandparents. They lived near the Farmer's Market at Fairfax and Third Street in 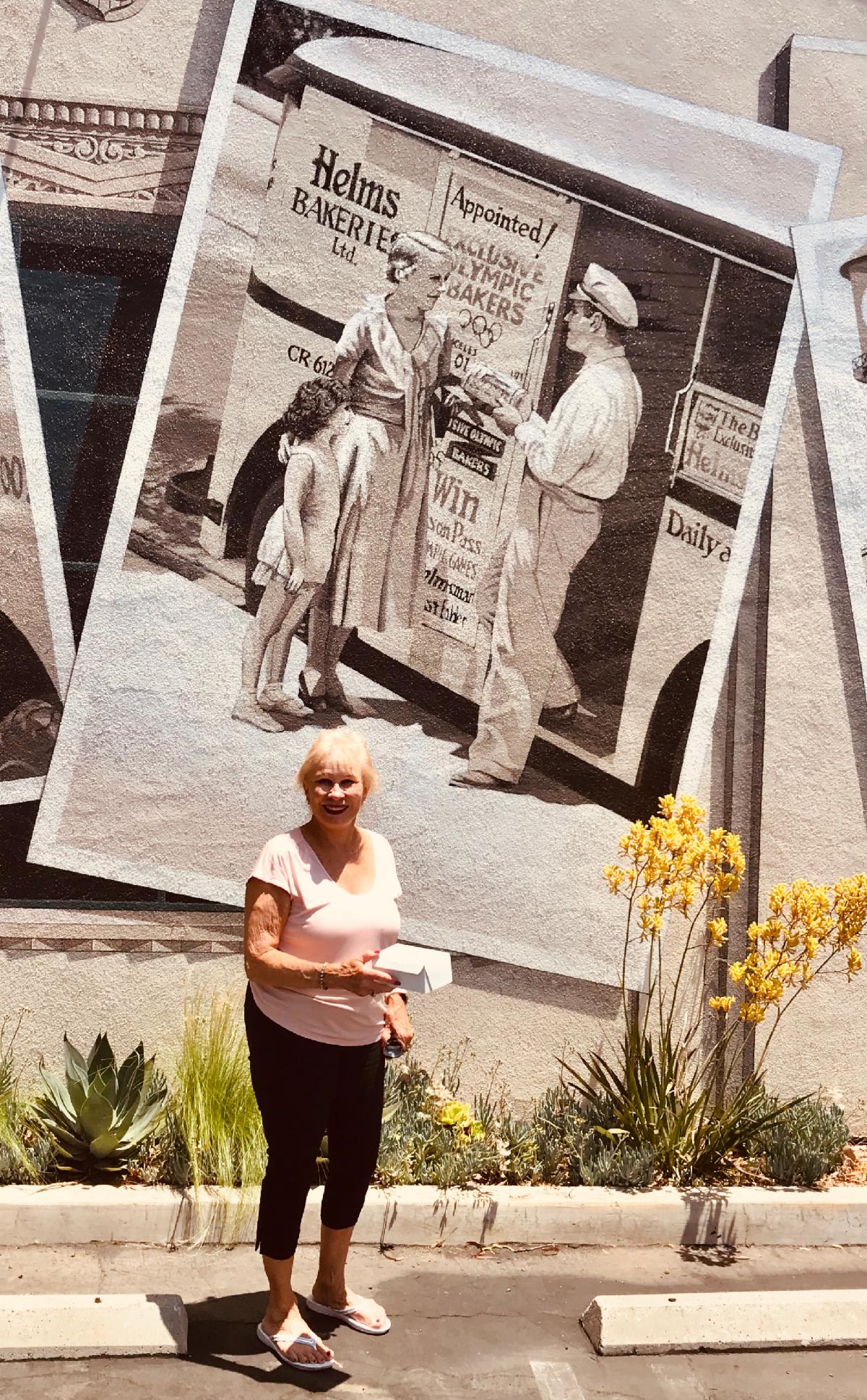 Hollywood. My sister and I would hear the Helms whistle and race around the house looking for our grandpa. He would smile at us as he escorted us out to the waiting truck. The Helms Man would grin as he opened the double doors at the back of his truck, and slowly guide the smooth wooden drawers out, revealing row upon row of pastries. There was never a rush. I could take my time and choose the perfect treat. I mostly went for the cream puff in the top drawer. The Helms Man would hand it down to me, wrapped in a paper. My grandfather would pay, and I would run to the porch, sit down, and slowly enjoy the creamy sweet. The memory for me is more than the Helms Man, it's wound up in the idyllic days with our grandfather. He was wonderful, a storyteller and one who took the time to teach me. The Helms Man sparked something old and cherished in my life.
Our Helms trip made a wonderful day, and I posted a  few of the Helms photos on social media. The result I received was staggering!! Many of my social media friends enthusiastically shared their experiences. They told me the Helms Man went all the way to Fresno, to Laguna Beach, to San Diego. It was so much fun to read what they had to say. One friend, Karen, told me about how her mom put the big blue H letter in the window so that the Helms Man would stop by, others told me about getting candied apples, sugar cookies, cream puffs. They recalled the metal change maker around his waist; that sometimes he would let them place the coins in it. I learned about how as kids they would hear the whistle and come racing. One friend, Royce, said he and his brother would beg for a coin from their grandma and go running. One time his brother tripped and lost the coin! Oh No! They missed the Helms Man as they searched for that coin. He invited us to look for that missing coin from 50 some years ago at his corner in Long Beach! 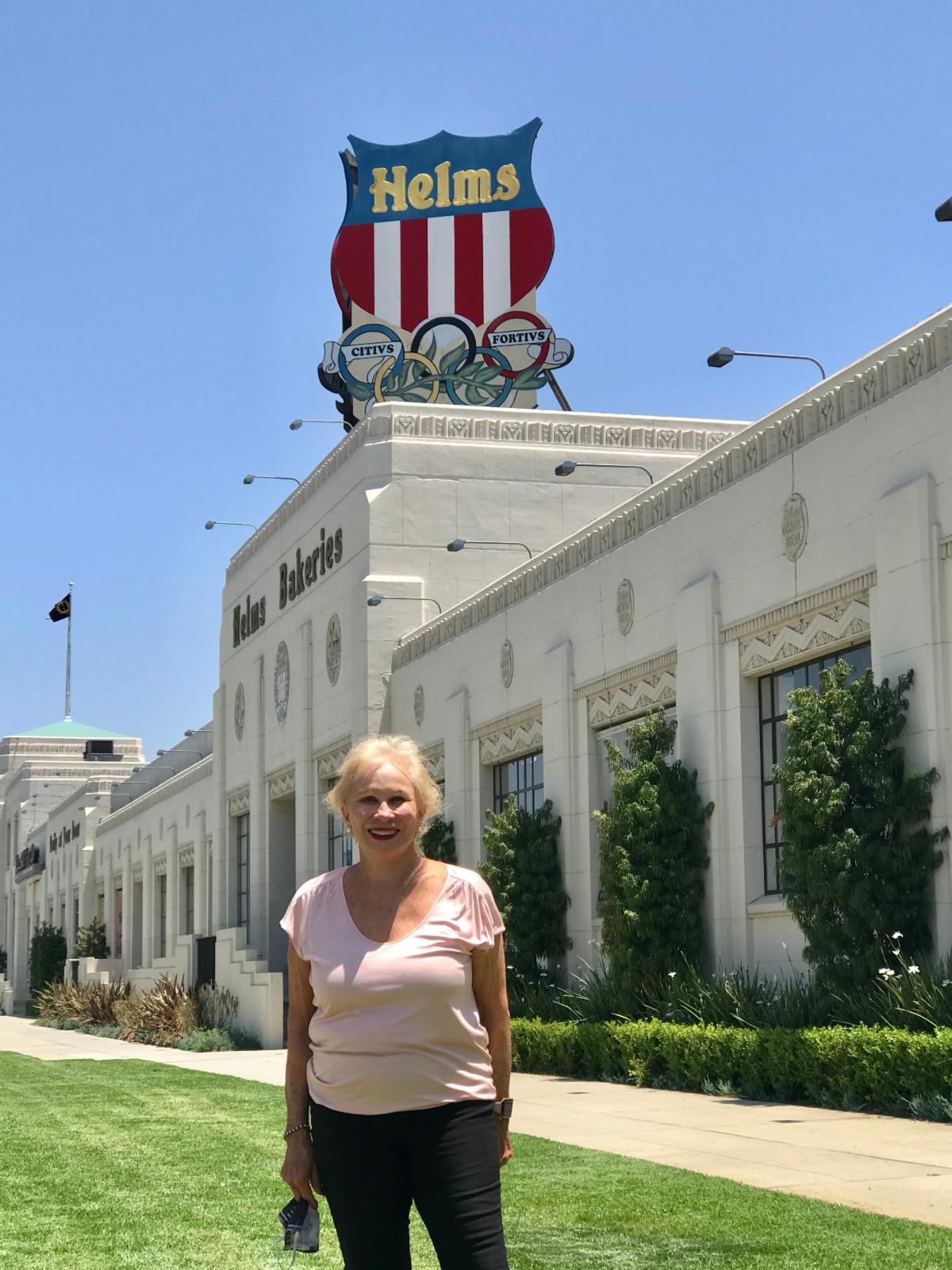 The Helms Man whistling through our neighborhoods was a daily ritual for thousands of us children in Southern California between 1932 and 1968. When the 1932 Summer Olympics in Los Angeles struggled financially due to the Depression, retired banker turned baker, Paul Helms, with his newly opened bakery, stepped up. He helped out and tied his bakeries to the Olympic athletes. His was the "Choice of Champions." The Olympians continued to ask for Helms bread across the next twenty years. Helms also participated in the Rose Parade, sponsored television shows, and provided the bread for the Apollo missions, becoming the "first bread on the moon." Even though his products were never sold in markets, he was remarkably successful. When he died in the late 1950's the family operated the bakery for another ten years. Today it is commemorated as an historic building and the area is noted as The Historic Helms Bakery District. I would recommend a visit. Perhaps you could enjoy a cream puff as you sit and take a little side tour to your past.
When I wrote the Helms Bakery post, I had no clue that my friends would be so overjoyed by recalling their own precious memories. The Helms Man was commonplace to us, perhaps that is part of it; the innocence of us as children running for our jelly donut. I know that writing my new book, remembering what it was like to range free across the sand through all the days of my childhood, has helped me get through this trying moment in history. It has reminded me how grateful I am for being alive; what a gift life is. We are going through one of the most complex, frightening times in our lives. Our world has been turned upside down and many of us are reeling trying to remain upright. Maybe that's what we all need to do, search our memories for precious moments, and notice other such events in real time. Perhaps we can remind ourselves each day, what a gift it is to be alive.
You know I would love to hear any of your memories or your Helms Man story. My best, donna
tagPlaceholderTags: